An unwilling executive, an unyielding bachelor and an undercover playboy discover they cannot escape love when it finds them. With dangerous situations pulling them apart, how can they hold on to the women who have captured their hearts? This collection includes books 1 to 3 of the steamy, stirring and suspenseful Captured by Love series. Each book in this series can be enjoyed as a standalone.

Book 1: The Unwilling Executive
Lucas Renner never expected his biological father to start acknowledging him as a son and only heir. He bet the old man has ulterior motives that has nothing to do with wanting to develop a relationship with him. He refuses to make contact with the man who has rejected him all his life... until his father's message is hand-delivered by a blushing beauty who stirs him in the right places.

Jade Tully thanks her lucky stars for her new role as the personal assistant to a wealthy CEO. Heaven knows she needs it. But she doesn't anticipate getting entangled in the personal conflict between her eccentric boss and his extremely hunky son--a man who rattles her poise and melts her heart. If she continues to do her boss's bidding, would she lose Lucas's trust and her chance to capture his heart?

Book 2: The Unyielding Bachelor
Rick Donnelly is under contract to remain unattached until his fifteen-year-old half-sister turns twenty-one. If he breaks the rules, not only will he have to hand over the management of his sister's substantial inheritance to his reckless stepmother, but he'll also have to transfer twenty percent ownership of his company to the untrustworthy woman. When the tempting Lexie Mead decides to knock down his heart's defenses, he finds himself in danger of breaking the contract's strict conditions--something he simply cannot afford to do.

Lexie Mead has long had feelings for the hunky Rick Donnelly. Tired of being treated as just another one of his friends, she sets out to win his heart from prettier and more aggressive women admirers. But Rick has complications to deal with... and enemies who will do anything to see him fail. She doesn't want him to lose the things he's worked hard to keep. But how can they have a future together when she is forced to walk away and Rick can't ask her to stay?

Book 3: The Undercover Playboy
Detective Carter Garrett is required to play the role of a cash-strapped playboy to solve an important case. When Cassie Stephens starts working in the art gallery owned by a suspect, his growing feelings for her threaten to blow his cover. He mustn't let Cassie in on the secret. It could ruin his team's best chance at catching a group of criminals whose leader could very well be Cassie's new boss. But when Cassie gets embroiled in the case, his heart joins in on the action--a dangerous situation he cannot allow to persist.

Cassie Stephens is ecstatic to land a high-paying job with perks anyone would envy. To her further delight, her new boss has business dealings with the charming Carter Garrett, her friend's hunky brother. But being aware of Carter's playboy ways, she orders herself not to dream of a future with him... until her new boss shares a secret about Carter she wasn't at all expecting. With everything seeming too good to be true, how far away are heartbreak and danger?

***
Each book in the Captured by Love series can be read as a standalone. For better enjoyment, the author recommends reading the books in order. 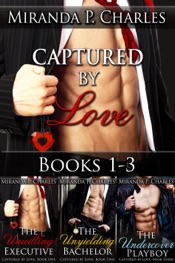