No decade in American history has roared as loudly as the 1920s. For two centuries, the United States had lived in happy isolation from international issues. Then it was drawn into World War I.

Although America was still fundamentally a provincial society, by the end of the war and the opening of the new decade, most Americans understood that a new era lay before the country.

Despite Prohibition, it was an intoxicating decade, populated with characters as varied as Clarence Darrow, Henry Ford, F. Scott Fitzgerald, Charles Lindbergh, Woodrow Wilson - and flappers. It was a time when ideas about love, public decorum, dress, and speech were changing. It was a time of cultivation of the new, shocking, and sometimes, according to the standards of the previous decade, vulgar: the stocking rolled below the knee, four-letter words in the mouths of debutantes, and speakeasies. All of these details, along with the economic collapse that ended the decade and sparked the Great Depression, are captured in this vivid chronicle by noted historian Edmund O. Stillman. 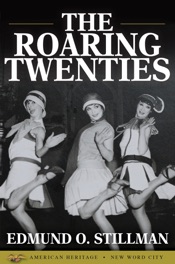